The Seto Inland Sea is located in western Japan and is the largest enclosed sea in the archipelago (Fig. 1).  In high economic growth of the 1960s and thereafter, the Seto Inland Sea was heavily eutrophicated due to serious water pollution by industrial effluent and urban wastewater.  At that time, red tides often occurred.  To resolve the situation, the Law for Conservation of Environment of the Seto Inland Sea was enacted in 1973 to regulate the industrial effluent and urban wastewater.  With the enactment of this law, the annual occurrence of red tides in the Seto Inland Sea decreased from 300 to 100 (Fig. 2), with a simultaneous decrease of nutrient levels (International EMECS Center, 2008) [1].  However, with changes in nutrient levels, the fisheries yield of species such as sardine and short-neck clam were affected negatively. Although the reason is unknown, dissolved inorganic nitrogen (DIN) concentrations decreased significantly after the year 2000 (Nishikawa et al. 2010)[2]. 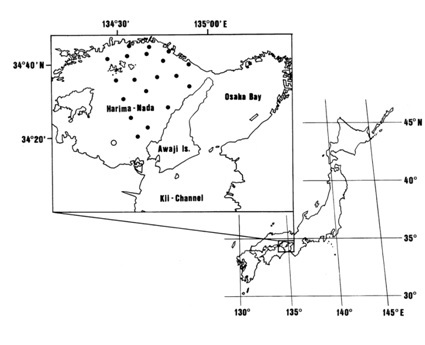 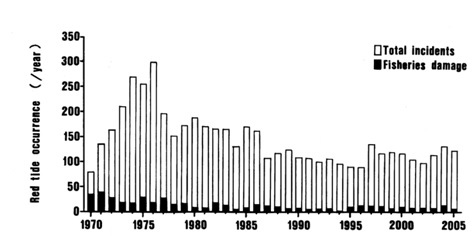 During the high economic growth since the 1960s, the Seto Inland Sea, Japan became heavily eutrophicated. However, the total nitrogen (TN) and total phosphorous (TP) loads decreased from the 1990s following the enactment of the Law for Conservation of the Environment of Seto Inland Sea in 1973. Also, nutrient concentrations in surface seawater gradually decreased after 1970 and particularly the dissolved inorganic nitrogen (DIN) concentration decreased after 1990. In Harima Nada, eastern Seto Inland Sea, the decrease in DIN was from about 10 μM in the 1970s to ～ 5 μM in the late 1990s (Fig. 3). The DIN/P ratio decreased from about 25 in the mid-1970s to about 10 in the mid-1990s and remained constant at about 10 until 2007 (t test, p<0.05). The DIN/Si ratio varied from 1 to 2 in the 1980s to about 0.5, after which values continued to gradually decrease due to the decrease in DIN and constant the silicic acid (Nishikawa et al. 2010)[2]. Due to this DIN decrease, Nori (Porphyra) culture heavily declined, and the bleaching of Nori occurred recent every year in the Harima Nada, because the seaweed nutrient uptake and its growth were influenced directly by the nutrient concentration of surface seawater.

We found that nutrient concentrations of the bottom layer at the southern part of Harima-Nada during summer periods after 2000 were quite low compared to the years before 1990 when the Nori  crop grew well (Tada et al. 2008) [3].  Nutrient concentrations in the surface seawater did not increase when mixing occurred compared to those of the stratified season (Fig. 4). 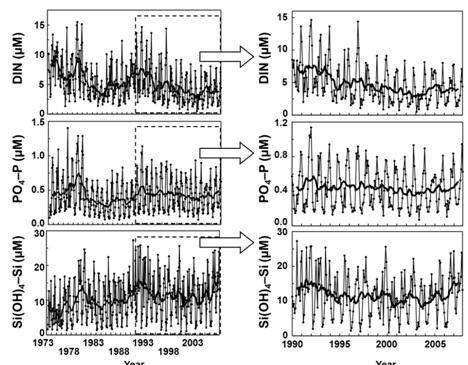 Fig. 4.  Seasonal variations of DIN at the surface (above) and bottom layer (below); 2007 versus

all other years at Harima-Nada, Seto Island Sea. Normal years were 1990s when the Nori crop

We also surveyed the contents of organic matter in the surface sediments (Yamaguchi et al. 2014)[4] and nutrient upward fluxes across the overlying water-sediment interface from the sediments (Tada et al. 2012) [5].  Our results showed that the organic contents and their horizontal distributions in surface sediments were similar with those of 30 years ago. On the other hand, the nutrient fluxes were quite low compared with those in the fluxes examined about 10 and 30 years ago in the same area. For example, Tada et al. (2012) [5] demonstrated  that phosphate upward flux in the northern part of Harima Nada decreased by 35% compared with those 30 years ago and nutrient fluxes (NH4, PO4 and Si(OH)4 ) in the Shido Bay connected to the southern part of Harima Nada, also apparently decreased compared with those of 10 years ago. Moreover, we made an attempt to estimate nutrient fluxes from the bottom sediments in the entire Harima Nada area (Tada et al. 2014) [6] and estimated that TN and DIN fluxes during summer season were 96.7 and 46.4 ton/day, respectively (Table 1). TN flux was 2.5 times larger than TN loading from the land, 38.0 ton/day (Ministry of Environment 2013)[7] and was also larger than TN (18.5 ton/day) and DIN (14.5 ton/day) riverine inputs (Yamamoto et al. 1996)[8] . Recently, Abo et al. (2015)[9] also reported that from 26 to 69% of the nutrient load came from the bottom sediment in the Harima Nada, the Seto Inland Sea. In any event, nutrient release from the bottom sediment was larger than that of nutrient loading from the land and the nutrient upward flux from the bottom sediment is very important for understanding the nutrient cycle in the coastal water. We suggest that the decrease of nutrient upward flux was an important factor in the recent nutrient decrease of the surface seawater in the Seto Inland Sea.

III. RESPONSE OF PHYTOPLANKTON ASSEMBLAGE  TO THE NUTRIENT DECREASE

In Harima Nada, diatoms were the dominant phytoplankton group (Nishikawa et al. 2010[2], Yoshimatsu 2008[10]). Particularly, in the north-eastern part, diatoms were the dominant phytoplankton group (>90%) over the 35-year period (Fig. 5). Total cell density of diatoms was higher during the 1970s to the early 1980s, exhibited a decrease in the mid-1980s and remained relatively constant thereafter, and there was a dramatic shift from Skeletonema dominance (～70%) to Chaetoceros in the mid-1980s (Fig. 6). These phenomena were demonstrated by Nishikawa et al. (2010) [2]. Moreover, in our previous study, the change of phytoplankton assemblages in the different Seto Inland Sea embayments, Harima Nada, Osaka Bay and Dokai Bay, where different eutrophication levels showed the same trend with the nutrient decrease (Fig. 7). In all three areas, in the most eutrophicated state, no organisms could survive. With nutrient decrease, the state changed to that in which Skeletonema was solely dominant and made red tides so often and then also changed to that in which harmful red tides such as Heterosigma akashiwo often occured, although Skeletonema was still dominant. Nutrient decrease developed an additional change in which the composition rate of Skeletonema decreased and the rate of other diatoms such as Chaetoceros increased, and then the biological productivity in coastal water decreased and the bleaching of Nori often occurred. But the nutrient concentration which caused each phytoplankton assemblage changes was different in three areas, although the change showed the same trend.

Fig. 5. Long-term variations in the composition of four phytoplankton groups in the surface layer of Harima-Nada, the Seto Inland Sea. (a) Northeastern and (b) Southern Harima-Nada (from (a) Nishikawa et al. (2010) and (b) Yoshimatsu (2008)).

On the other hand, the change of phytoplankton biomass with nutrient decrease was not clear, and in chlorophyll a (Chla) data set which was usually used as the indicator of phytoplankton biomass, there was no evidence of apparent Chla decrease in Harima Nada. From our data, it was thought that the response of phytoplankton assemblages to the decrease of nutrient concentrations seemed to be no apparent decrease of biomass but rather a change of species group and species composition. The phytoplankton species shift from Skeletonema dominance to Chaetoceros, we think, can be attributed to the increase of light penetration in the water column, due to an improvement in transparency. We also found that the Skeletonema growth rate was higher than other diatom growth rate under low light conditions due to the shallow transparency, but Chaetoceros can grow the same as Skeletonema under a sufficient light condition (Tada et al. unpublished data).

Fig. 6.  Long-term variations in monthly total cell density and species composition of diatoms in the surface layer of Harima-Nada, Seto Inland Sea, for 35 years from April 1973 to December 2007 (from Nishikawa et al. 2010).

7. Ministry of Environment, “Results of 2012 Comprehensive Survey on Water Pollutant Discharge (in Japanese),”