Studies of coastal zone hydrodynamics in the semi-enclosed and marignal seas are primarily motivated by conventional wisdom that the coastal currents is main driver for shelf water ventilation, self-cleaning and pollution-removing processes. Coastal water pollution is often serious problem for major ports, coastal cities and recreational facilities. In the Russian part of the Black Sea, one of the regions under strong anthropogenic stress is the shelf zone in vicinity of cities Gelendzhik and Novorossiysk. Since 2010, the Southern Branch of the P.P. Shirshov Institute of Oceanology RAS (SIO RAS) in Gelendzhik maintains the observational site for multi-disciplinary studies and monitoring of the marine environment in the coastal zone.

The site occupies an area of 10*15 km2 (Fig. 1, [1]). The continuous year-round monitoring is carried out using autonomous measurement systems both bottom mounted and moored buoys. Three types of autonomous platforms are used: 1) acoustic Doppler velocity profiler (ADCP) at the bottom mount; 2) thermo-chain at the mooring line; 3) moored profiler Aqualog [2]. By these platforms the time series of hydrophysical and bio-optical data (vertical profiles of temperature, salinity, density, current velocity, acoustic backscatter, water transmissivity, chlorophyll-a fluorescence, etc.) of high spatial and temporal resolution are obtained. The data from some of the autonomous platforms is transferred via a communication line to the coastal center for real-time operability. Also the ship-born multidisciplinary surveys are carried out on a regular basis.

The observational data are used for research on marine environment and biota, cross-shelf exchange processes and etc. In particular, it has been shown that there is a significant short-term variability of the coastal zone hydrodynamics and upper mixed layer thickness at the scale from 1-3 days to 1-2 weeks [3-5]. It was found that this variability is to a certain extent due to the influence of external forcing including the open ocean dynamics and the local wind forcing.

A deep part of the Black Sea is characterized by cyclonic circulation, encircled by the Rim Current (RC) [6]. The basin scale cyclonic gyre and the RC are formed under the impact of cyclonic vorticity of the wind over the Black Sea region [7]. In autumn and winter, when wind cyclonic vorticity is enhanced, RC is strong and pressed against the continental slope. In spring and summer when cyclonic vorticity of the wind decreases, RC becomes weak; owing to baroclinic instability, its flow forms meanders and often breaks into mesoscale eddies [8-10]. In autumn and winter, the growth of the RC meanders to large amplitude is restrained by the Ekman pumping [8]. However, the RC meandering can be developed in any season of the year.

Figure 2 shows the time-depth diagram of specific density and  alongshore current velocity measured by the profiler Aqualog on moored buoy station  at a depth of 270 m (the upper part of the continental slope) from November 5 till December 27, 2012). The alongshore velocity changes its direction in 5-15 days. In its turn the isopycnals change their position coherently with the velocity. They deepen with the development of north-western current, and rise with the development of the south-eastern current. The amplitude of vertical displacement of isopycnals including the contours of specific density 16.2 kg/m3, which coincides with the upper boundary of hydrogen sulfide layer, is up to 50 m.

Fig.2. Variability of vertical distributions of the specific density and alongshore current velocity in the upper 200 m from November 5 to December 27, 2012 according to profiler Aqualog data. Profiling frequency was 4 times per day. Black lines are contours of specific density (isopicnals), orange line is isopycnal 15.8 kg/m3, lower limit of the oxygen-containing layer, red line is isopycnal 16.2 kg/m3, the upper boundary of hydrogen sulfide layer. Color marks the direction of longshore velocity (color bar at the right vertical axis), its negative values are for the SE current direction, positive are for the NW current direction.

The nature of the described above quasi-periodic oscillations is the RC meandering (Fig. 3). Due to displacement of the RC meanders along the shore in the NW direction, moored station with Aqualog profiler periodically appears in the area of cyclonic and anticyclonic meanders. Being in cyclonic meander profiler detects the NW flow and lowering of isopycnals due to geostrophic adjustment. After several days or a week, the moored station is in the anticyclonic meander and the Aqualog profiler measures the SE flow and the rise of isopycnals [11].

Quasi-periodic oscillations both of direction and magnitude of the alongshore current velocity at the upper part of the continental slope have strong impact on the hydrodynamics of the shelf. Analysis of satellite and towed ADCP velocity survey data, revealed that in case of a cyclonic RC meander anticyclonic submesoscale eddies are formed at the shelf, while in case of the anticyclonic meander the cyclonic submesoscale eddies are generated [3, 4]. 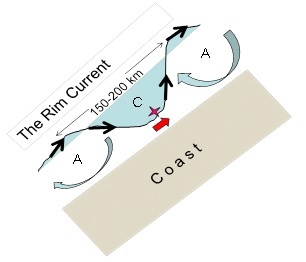 Submesoscale anticyclones often accumulate passive tracers and ensure rapid transport of pollutants from the coast to the outer shelf (Fig. 4), whereas submesoscale cyclones produce not only horizontal, but also intense vertical circulation and contribute to the rise of the rich chlorophyll thermocline waters to the sea surface (Fig. 5, [11]). These eddies play an important role in the ventilation of the coastal zone especially in areas with a concave shoreline where circulation is weaker in comparison with that in the shelf regions with a flat or convex shore line.

Physical mechanisms of submesoscale eddies formation were studied by means of laboratory modelling [12-14]. Several experiments were conducted in the cylindrical tank on top of rotating platform filled by homogeneous or stratified fluid. First, the mechanism of eddies formation behind the capes was studied [12]. It was shown that periodic eddy formation behind the cape and separation of eddies from the coast occur only in the case of decelerating cyclonic alongshore current in rotating fluid. The explanation for the nature of this effect based on the account of bottom Ekman friction was suggested. The dependences of eddy basic characteristics (diameter, orbital velocity, etc.) on time and external parameters were established.

Results of the laboratory experiments were used successfully to interpret the observations of the submesoscale eddies at the narrow shelf of the NE Black Sea.

As a characteristic period of the oscillations of the alongshore current direction due to meandering of the RC is about 10 days, during one half of this period the conditions for formation of submesoscale cyclones are favorable, and during other half of the period they are favorable for submesoscale anticyclones formation.

It should be noted that in the periods of restructuring of the circulation upon the continental slope (transition from a cyclonic RC meander to anticyclonic one or vise verse) shelf circulation could be rather weak. In such situations, contaminants may accumulate at the source for several days, resulting in their concentration grouth.

According to Ekman's theory, the events of the coastal upwelling and downwelling should occur in NE Black Sea if the wind has significant alongshore component: NW or SE, respectively. It is known that Ekman coastal upwelling plays important role in maintaining a high level of bio-productivity.

One of the complete Ekman upwelling events, which was followed by well developed downwelling, was observed at the SIO RAS research site on September 24-28, 2013.

Figure 6 illustrates the interrelations between wind forcing, water temperature and alongshore current velocity during the period of the upwelling and downwelling events mentioned above. The time based diagrams show wind velocity vectors measured by the automatic weather station (Fig. 6a) and sea temperature vertical distribution measured by the moored thermochain, as well as absolute value and direction of the current velocity vertical distributions measured by bottom mount ADCP (Fig. 6b–6d, respectively). During September 24-26, prevailing northwesterly wind led to the temperature decrease by more than 10°C in the entire water column. The complete upwelling event was accompanied by development of the coastal current of southeastern direction. On September 26 (second half of the day), the wind direction changed to the southerly then to the southeasterly and the wind velocity increased. The wind change resulted in relaxation of the upwelling and quick development of the downwelling manifested itself in temperature increase up to 19.5°C in the entire water column. The downwelling phase was accompanied by the development of the coastal current of the NW direction, which velocity peaked at 70 cm/s.

A criterion of the complete Ekman upwelling in two-layer fluid was obtained in [15]:

Here tx is the wind stress alongshore component , t is time from the beginning of the upwelling favorable wind,  f is the Coriolis parameter, and rw is the seawater density, H -  initial upper mixed layer (UML) depth, Rd = (DrgH/rw)0.5/f is local baroclinic deformation radius and Dr is the density jump between the upper and lower layers. This criterion should be verified.

Figure 6b demonstrates also an incomplete upwelling event on September, 18-22. Cold thermocline water did not rich the surface instead it was observed at the depth of about 10 m. The cause of this upwelling event was not a wind forcing. As could be seen from Fig. 6a, wind was weak and variable during those days. However, the existence of the alternating alongshore and eddy currents, whose nature is not directly related to local wind forcing, should be a widespread cause of coastal incomplete upwellings and downwellings. Indeed, if a NW baroclinic alongshore jet exists in the upper due to geostrophic adjustment a downwelling should be observed near the coast and the upwelling would occur in the case of a SE alongshore current.

This upwelling of dynamical origin could enhance the wind induced turbulent entrainment of thermocline water into UML. Such events could increase the primary production and chlorophyll-a concentration of UML because the thermocline water is rather rich in nutrients. An example of the impact of wind-induced turbulent entrainment on the chlorophyll-a concentration is given in the next section of this paper.

It follows from (2) that the rate of turbulent entrainment is proportional to the cube of wind velocity and inversely proportional to the thickness of UML. If everything else being equal, an intensive turbulent entrainment occurs when the wind is strong, and the initial thickness of the UML is small. This situation was observed at the beginning of July in 2006 when after a long period of weak wind, strong burst of the northeasterlies of the speed about 15 m/s was observed. Initially thickness of the UML was about 10 m. After two days of the strong wind, the UML  thickness increased to 25 meters while its temperature dropped from 22-25°C to 15-18°C (Fig.7), see also [18]. The application of (2) to evaluate the temporal evolution of the UML under the real wind forcing yielded results similar to those observed (see Fig. 8).

Fig.8. Time evolution of absolute value of the wind velocity V based on the NCEP data, the UML thickness H and its temperature T during July 1–7, 2006, in the area of strong winds between the Kerch straight and city of Tuapse.

One important phenomenon related to strong northeasterly wind need to be mentioned also is a formation of warm alongshore cyclonic current (Fig. 7). This fast current originates from Tuapse-Sochi region just after the wind decay and reaches Gelendzhik – Novorossiyisk region in 2-3 days. The physical origin and characteristics of the current are described in [18]. Here we would like to notice that quasi-periodic formation of such currents after the northeasterly wind events could be an efficient mechanism of alongshore transport of nutrients and pelagic species from the SE sea towards the NW sea.

An intense turbulent entrainment of thermocline water into UML led to increase of satellite measured chlorophyll-a concentration (CC) two days after the wind decay (Fig. 9). Using the empirical relation between the CC values derived from the satellite data and in situ measurements was calculated. The plot of these values is shown in Fig. 10 along with that of the wind velocity. As follows from Fig. 10 the increase in CC lasted for a few days. In a week after the decay of strong wind, CC recovered to its initial level. An impact of wind forcing on CC and primary production should be studied in more details in the future.

Fig. 10. Time evolution of chlorophyll “a” concentration (Cl_a) together with wind velocity (V).