The Northern regions of the Earth are among the most vulnerable to various kinds of anthropogenic impacts. Quite severe physical-geographical conditions of these regions determine the slow exchange of matter and energy in ecosystems, and, therefore, pollutants that come here, to a small extent exposed to transformations and excretion, and their accumulation causes long-term complications of the ecological situation. Feature of sediments is their ability to accumulate heavy metals, and in the case of changes in physical and chemical and hydrodynamic conditions of the environment to return them into the water.

Heavy metals are among the priority pollutants of the environment, and this fact concerned the international community, resulting in the adoption of international conventions on the restriction of the use of different metals in industry and agriculture [1].

The Northern Dvina River mouth area flowing into the White Sea is a marginal filter. Here both natural processes and anthropogenic factors play an important role. Marginal filters are the first stage of purification from water contaminants coming from river runoff [2]. The content of some heavy metals in bottom sediments may be regarded as an indicator of types, duration and intensity of anthropogenic influence. In this regard, it is relevant to the purpose of the present study – the study of the distribution and behavior of heavy metals on the profile “Northern Dvina River – White Sea”.

The data collected during a series of complex missions carried out by collective of Southern Federal University and the P. Shirshov Institute of Oceanology RAS since 2004 in the mouth area of the Northern Dvina River, Dvina Bay and the White Sea formed the basis of materials for this research [3-12]. Samples of atmospheric condensation, river water, bottom sediment and soil in order to determine their content of heavy metals priority group were selected during research expeditions. This priority group include the metals rendering the greatest toxic effect on alive organisms – Hg, Pb, Cd, Cr, Ni, Cu and Zn. The main physical and chemical indexes (redox potential, hydrogen ion exponent, temperature, etc.), contents of gases and organic matter were defined in parallel sizes. Lithological description and granulometric composition of bottom sediments were produced. Likewise, meteorological and hydrological observations were conducted.

The study of the heavy metals contents in the bottom sediments is of greatest interest to the authors. This landscape component represents the depositing environment for accumulation of substances of various genesis. However, when a mechanical force or a change of hydrological and hydrochemical situation at the boundary “water – bottom sediments” these sediments enriched with pollutants, can be a source of secondary pollution of waters caused by remobilization of contaminants. In this regard, it was interesting to observe the distribution and behavior of heavy metals in bottom sediments on the transect “Northern Dvina River –White Sea”. Six stations located in the river estuarial area and five stations on the water area of the White Sea are chosen for creation of a profile ”the Northern Dvina River – the White Sea”. The total length of the transect ”Northern Dvina River – White Sea” was 520 km (fig. 1.).

Sampling, preparation and determination of heavy metals content in bottom sediments was carried out under techniques previously approved on water objects of Russia [7-9]. The samples of bottom sediments along the profile “river-sea” were collected in the estuarine area of the Northern Dvina River from aboard the research vessel “Iceberg-2” (2006-2008) and on the high seas aboard the research vessel “Professor Shtokman” (64th round, August, 2004). The total number of definitions was more than 300.

Table 1. The content of heavy metals in upper layer of bottom sediments (0-5 cm) on the profile “Northern Dvina River – White Sea” (made according to [10-11])

Above the line – spacing changes of concentrations, below the line is the mean value 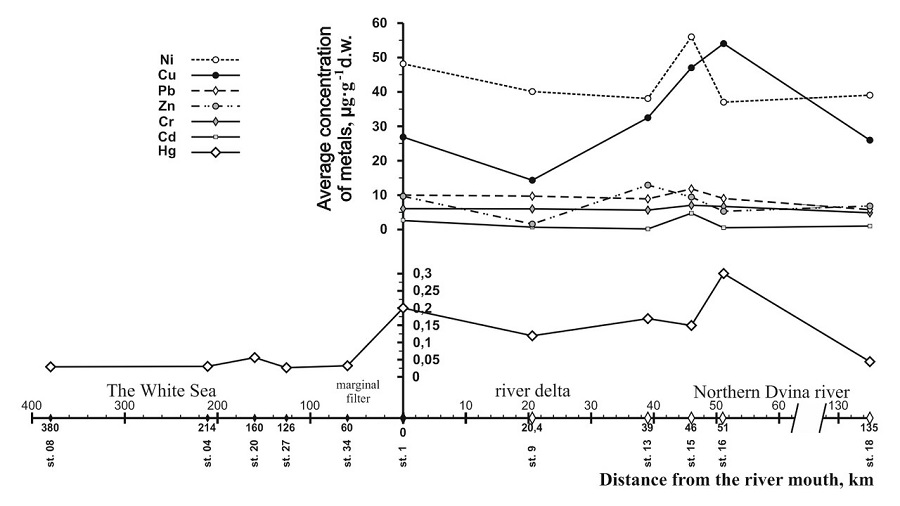 Fig. 2. The distribution of heavy mettals in upper layer of bottom sediments (0-5 cm) on the profile «Northern Dvina River-White Sea»

The studies revealed that the profile “Northern Dvina River – White Sea” (from st. 18 to st. 1) the curve of the heavy metal content distribution has a zigzag shape. Each of the investigated metals is characterized by peculiarities in the distribution of the studied transect. So, three pronounced peaks higher concentrations (fig. 2) have been allocated for Hg by authors [11]. The first peak corresponds to st. 16, where the gravitational barrier presented in silt sediments accumulated a considerable part of Hg coming from the area of Novodvinsk. The second peak is formed after passing through the gravitational barrier at the station 13. The third peak is located in the Dvina Bay in the area of Mudyugsky isl. (fig. 2). This is the main part of the marginal filter. Here, in the range of salinity 1-15 PSU is a mixture of river water with the sea. Active process of co-precipitation of mercury with suspended material extends to st. 34.

Such distribution is characterized also by Cu. However, for these metal two peaks in profile is characterized. The absence of a peak at the st. 13 most likely due to the source of metal income on the st. 15, where the road and railway bridge over the Northern Dvina River. It is worth noting that for the other metals except Zn, the peak shifted to high concentrations of st. 15. Increasing concentrations at the st. 1 in the Dvina Bay is typical for all pollutants, which once again confirms the theory of co-precipitation of metals with suspended solids.

On the example of mercury, the authors discussed the mechanism of the Northern Dvina River marginal filter activity [11]. So, the river area from st. 15 to st. 9) can be attributed to the gravitational zone that at high tide has a certain influence processes that are typical for the sea-river mixing zone. The latter is located mainly between st. 9 and st. 1. It is characterized by the prevalence of physical and chemical processes, especially coagulation and flocculation, over gravity, rapid removal of mercury from water in the composition of organic mineral complexes predominant and transformation in river water dissolved organic forms of mercury in inorganic. Here sediments are presented sandy silts and silty sands. In the area between the st. 1 and st. 34 there is a change of clayey and sandy-silty sediments from the mouth part of the estuary on pelit-silty and pelitic mud from the central part of the Dvina Bay. This area of marginal filter can be attributed to the biological zone with the enlightenment of water and high content of biogenic elements. Here bioextraction of mercury is added to the processes of sorption. According to data [12], redistribution ratio dissolved and suspended in water forms of mercury is observed in the above-described barrier zones.

From water derived up to 95% of migrating in suspension form of mercury and up to 90% dissolved form. The marine part of the profile (st. 27 – st. 8) is characterized by relatively low and uniform distribution of the total mercury content in bottom sediments and predominantly politic form of their composition. The variation of the total mercury concentration in all this vast area is insignificant, with the exception of article 20, located in the basin near the border with the White Sea Throat where there is the great influence of the Barents Sea waters [13].

In the analysis of the distribution of metal concentrations in the upper layer of bottom sediments (0-5 cm) on the transect “Northern Dvina River – White Sea” chronic contamination of river and marine ecosystems have not been identified. Pollution has local character. It found in bottom sediments in areas of impact influence of the facilities and transport of the Arkhangelsk agglomeration.

The marginal filter “Northern Dvina River – White Sea” contributes coprecipitation with a suspended matter of the main part of pollutant of anthropogenic genesis that reduces risk of penetration of pollutants into waters of the White Sea.